Ceremonial seat (osa´osa) at The Cinquantenaire Museum in Brussels, Belgium

3D
Scan The World
2,975 views 75 downloads
Community Prints Add your picture
Be the first to share a picture of this printed object
0 comments

Ceremonial seat (osa´osa) at The Cinquantenaire Museum in Brussels, Belgium

It is a circular seat in stone with four corner. Leader or noble were using it in the village. The seat present the head of a lasara, mythic animal aiming to protect the people. On the neck, we have a kalabubu, necklace sign of courage and hunting skill.

The people of Nias Island off the southwest coast of Sumatra are renowned for their monumental stone carving. Much of Nias stone sculpture is commemorative in nature—created to honor members of the nobility, both living and dead. Ritual stone seats (osa' osa) are unique to the central region of the island; they serve as chairs for high-ranking nobles at feasts and other ceremonial occasions, where they are set up near the home of the feast giver as a sign of his or her exalted rank. This example is of a type called "hornbill" (gogowaya), named for a large bird important in many Indonesian and Melanesian cultures. The "hornbill" here is depicted not as a discrete species but as a mythical animal that combines the teeth of a fearsome carnivore and the antlers of a deer with the distinctive beak, crest, and tail of the hornbill. The result is a composite creature, which acts as a fearsome protector of the nobility and their ancestors.

many other seats of his variety exist, including these two (1, 2) uploaded onto Scan the World. 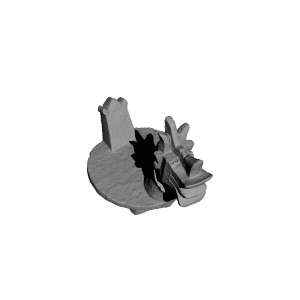 ×
0 collections where you can find Ceremonial seat (osa´osa) at The Cinquantenaire Museum in Brussels, Belgium by geoffrey.marchal