Chares at The British Museum, London

3D
Scan The World
2,347 views 56 downloads
Community Prints Add your picture
Be the first to share a picture of this printed object
0 comments

Chares at The British Museum, London

According to an inscription from the Sanctuary of Apollo Delphinios at Miletos, the Milesian state procession, as part of the New Year festival, made a series of stops along the Sacred Way to sing hymns and make sacrifices. Their last stop before the temple at Didyma was by a group of statues called the 'Chares statues'. These figures were possibly displayed on a semi-circular base in a monumental shrine, similar to one recently found along the Sacred Way.

This marble statue is the only one of the group that we can identify today. The inscription on the front and side of the right chair leg says, 'I am Chares, son of Kleisis, ruler of Teichioussa. A gift to Apollo'. 'Chares' is one of the few surviving Greek statues that is referred to in an ancient inscription. It is also one of the earliest named monumental 'portraits', although in this period a portrait was not intended to be an actual likeness. 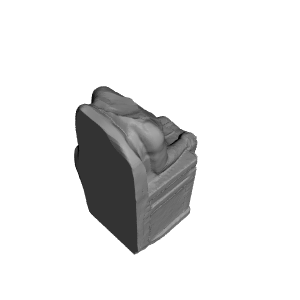 ×
0 collections where you can find Chares at The British Museum, London by Scan The World