Chicago Board of Trade Building in Chicago, Illinois

3D
Scan The World
4,924 views 217 downloads
1 collection
Community Prints Add your picture
Be the first to share a picture of this printed object
0 comments

Chicago Board of Trade Building in Chicago, Illinois

It is appropriate that the building so many architecture fans consider the best in Chicago is located nearly at the center of the city. Chicago Board of Trade is a textbook art deco skyscraper, complete with three-part division, setbacks, light wells, and all the decorative touches that go with a skyscraper of its period, topped off by a pyramid and an aluminum art moderne interpretation of the goddess Ceres.  It stands powerfully as a gateway to the city's financial district, at one time rising above the other buildings of the region at a time when agriculture was king. Even as the building aged, it grew with several additions by notable architects who took great pains with style and material to create harmonious, but updated, structures that would work with the masterpiece original.  But over the years while commodities lost their luster, this building became less and less prominent in the skyline, overshadowed by banks and mass merchandisers. But the building remained tied to the heart strings of the city, and is a sentimental favorite that brings people back to a different time in a familiar space. This is not the first Chicago Board of Trade building at this location. The original was erected in 1882l, and was the first building in Chicago with electricity. But when the Federal Reserve built its new bank across the street the building was declared unsound. The Reserve's building was so heavy and solid that it caused problems with the original CBOT building's flimsy foundation. In 1929 the original building was torn down and construction began on the second. It was hailed as a masterpiece then, and is no less remarkable now. The CBOT located on skyscraper's 12th floor includes a 19,000 square foot trading floor and has been in almost continuous operation since it opened.  But the real show is on the outside. There are dozens of statues adorning the building and its immediate surroundings, all of them reflecting the various activities going on inside the Board of Trade. Allegorical statues of concepts like industry and agriculture, along with bulls, indians bearing corn, and other traders.  Of course, the star of it all is the stylized Roman goddess Ceres, perched atop the building's copper pyramid. She is made of solid aluminum and weighs 6,500 pounds. By the 1980's she had deteriorated significantly and was helicopters off her perch for some rehab and then returned to her roost. 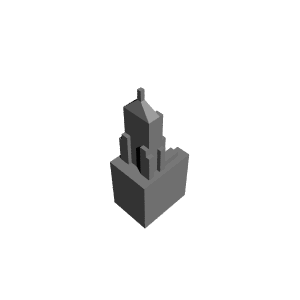 ×
1 collections where you can find Chicago Board of Trade Building in Chicago, Illinois by jkurstin22