Chief Black Bird From the Rees-Jones Collection at Amon Carter Museum, Fort Worth

Chief Black Bird From the Rees-Jones Collection at Amon Carter Museum, Fort Worth

Chief Blackbird (Wash-ing-guhsah-ba) (ca. 1750 – 1800) was the leader of the OmahaNative American Indian tribe who commanded the trade routes used by Spanish, French,British and later American traders until the late 18th century. He was one of the first of thePlains Indian chiefs to trade with white explorers and also believed to be the first of the Plains Indian chiefs to openly question white encroachment. Blackbird used trade as a means to prosperity for his people and as a way to ensure white explorers were aware that they were the guests. The Omaha were not warlike people, yet they were the first on the Great Plains to have mastered equestrianism around 1770 and were at one point, while Chief Blackbird was alive, the most powerful Indian tribe in the Great Plains.

Chief Blackbird died during a smallpox epidemic in 1800. In 1804, the Lewis and Clark Expedition members were led to Chief Blackbird's burial site, which sits on a bluff on the west side of the Missouri River, in present day Nebraska.

Blackbird Bend in western Iowa is named for Blackbird. 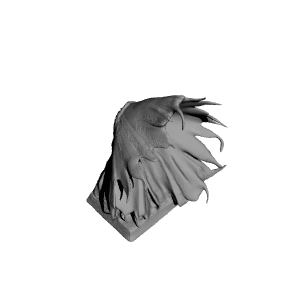 ×
22 collections where you can find Chief Black Bird From the Rees-Jones Collection at Amon Carter Museum, Fort Worth by 3DLirious
×
Mark Brown
@relmicro
3
Printed on: Creality Ender 3
Material: PLA
Posted at: 22nd February 2019

Printed in Stronghero3D Bronze PLA filament at 0.15mm layer height. Scaled to 200mm tall. Model took over 66 hours to print. Weathered with a mixture of brown and black acrylic craft paint to simulate patina. Sealed with matte clear lacquer to protect the finish and give a little shine.