Christian martyr, "Not of this world"

3D
Scan The World
2,653 views 91 downloads
Community Prints Add your picture
Be the first to share a picture of this printed object
0 comments

Christian martyr, "Not of this world"

In his early works Mark Antokolski focused primarily on depicting genre scenes but later took interest in historical and religious themes (Christ before the People, 1874; Christian Martyr, 1884), he also sculpted portraits and monuments. With the sculpture Ivan the Terrible he initiated a series of works inspired by the history of Russia which gained him wide acclaim. Tsar Alexander II – when visiting Antokolsky’s studio – bought one sculpture to be presented in the Hermitage. In 1872, Antokolsky sent the sculpture called Peter the Great, bought by Alexander II himself, to Petersburg.

A wave of pogroms of Jews swept through Russia after 1881, resulting in Antokolsky being treated with a certain disdain – some press articles suggested that being a Jew, he had no right to make art focusing on Russian history and Christian themes and that he only gained fame thanks to Jewish bankers. Antokolsky was defended by writer Ivan Turgenev and art critic Vladimir Stasov. The disillusioned artist, however, moved to Paris (1893) and never returned to Russia. In France, he sculpted the following works: Spinoza (1881), Mephistopheles (1884), Yaroslav the Wise (1889), Nestor – the Chronicler, Yermak Timofeyevitch (1891). In the International Expo in Paris, Antokolsky’s works were awarded the highest distinction – the National Order of the Legion of Honour. 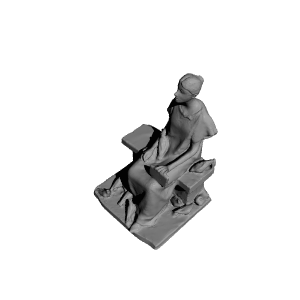 ×
0 collections where you can find Christian martyr, "Not of this world" by Scan The World