Cinerary urn for Donata and Restituta

3D
Scan The World
2,216 views 76 downloads
2 collections
Community Prints Add your picture
Be the first to share a picture of this printed object
0 comments

Cinerary urn for Donata and Restituta

This funerary urn (also called cinerary urns and burial urns) were used by many civilizations. After a person died, survivors cremated the body and collected the ashes in an urn. Pottery urns, dating from about 7000 BC, have been found in an early Jiahu site in China, where a total of 32 burial urns are found, and another early finds are in Laoguantai, Shaanxi. There are about 700 burial urns unearthed over the Yangshao (5000–3000 BC) areas and consisting more than 50 varieties of form and shape. The burial urns were used mainly for children, but also sporadically for adults. In ancient Greece, the lekythos, a type of pottery in ancient Greece, was used for holding oil in funerary rituals. In the Bavarian tradition, a king's heart would be placed in the urn upon his death (as happened with King Otto of Bavaria in 1916). Cremation urns were also commonly used in early Anglo SaxonEngland, and in many Pre-Columbian cultures.The First Century was the century that lasted from 1 to 100 according to the Julian calendar. It is often written as the First Century AD or First Century CE to distinguish it from the First Century BC (or BCE) which preceded it. The First Century is considered part of the Classical era, epoch, or historical period.

Made in the 1st century, this period Europe, North Africa and the Near East fell under increasing domination by the Roman Empire, which continued expanding, most notably conquering Britain under the emperor Claudius. The reforms introduced by Augustus during his long reign stabilized the empire after the turmoil of the previous century's civil wars. Later in the century the Julio-Claudian dynasty, which had been founded by Augustus, came to an end with the suicide of Nero in 68. There followed the famous Year of Four Emperors, a brief period of civil war and instability, which was finally brought to an end by Vespasian, ninth Roman emperor, and founder of the Flavian dynasty. The Roman Empire generally experienced a period of prosperity and dominance in this period and the First Century is remembered as part of the Empire's golden age. The First Century saw the appearance of Christianity, following the ministry, crucifixion and resurrection of Jesus of Nazareth in the Roman province of Palestine.

Easy to print, only need 3 supports 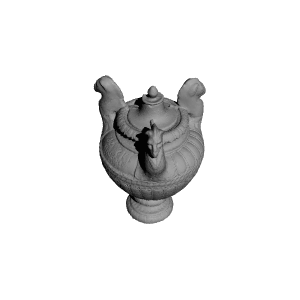 ×
2 collections where you can find Cinerary urn for Donata and Restituta by geoffrey.marchal