3D
360°
Scan The World
2,120 views 127 downloads
Community Prints Add your picture
Be the first to share a picture of this printed object
0 comments

As part of a residential construction project in vicolo Pastori, a new Roman funerary area connected to the Via Annia road axis emerged. The area, which is located at the north-eastern edge of the necropolis of Via Gradenigo, was investigated by the Superintendence for Archaeological Heritage of the Veneto in the summer of 2010. The excavation brought to light 130 tombs, dated between the age Augustan and the beginning of the 2nd century AD An interesting funerary altar has been found inside a north-south sense-oriented trench, like all the tombs and structures found there.

The monument, in Aurisina stone, is composed of a quadrangular base, in the center of which the housing for the cremated remains was obtained, and a cylindrical body originally intended to cover the urn. The fastening system between the cylindrical stem and the underlying ara was guaranteed by iron grappas, still in situ, while the crowning, which was to lie over the cylindrical element, was lost.

The cylindrical stem represents relief decoration between two frames. In the upper part runs a frieze of Doric type. In the central part there are three garlands of flowers and fruit, with ends closed by intertwined ribbons with Hercules knots, which are placed above two Satyr heads and a female head. Additional plant motifs and probably a lizard complete the decoration below. 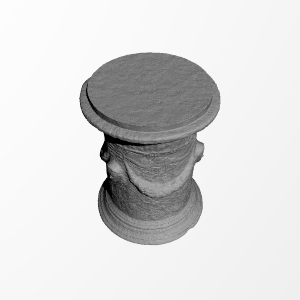