3D
Featured
3,695 views 151 downloads
3 collections
Community Prints Add your picture
Be the first to share a picture of this printed object
0 comments

In the first century ad the Roman author Pliny the Elder wrote in his Natural History (34.69–70) that the famous fourth century B.C.E. Athenian sculptor Praxiteles had created a bronze sculpture depicting a youthful Apollo about to stab a lizard with an arrow. He used the epithet sauroktonos (lizard-slayer) to refer to Praxiteles’s masterpiece. Several Roman marble copies of the work have survived, attesting to its popularity well into the Imperial period.

These copies show a young figure of Apollo leaning on a thick, leafless tree trunk, up the surface of which climbs a lizard. Thus, the sculptural type has been known since Roman times as Apollo Sauroktonos.

In 2004 the Cleveland Museum of Art acquired the only known full-sized bronze version of the sculptural type. Experts are divided about if the statue is the original bronze by Praxiteles or a high quality ancient copy.

The statue has been a thorny problem for the museum as its provenance is lacking. It was sold to the museum by an antiques business previously found guilty of selling looted artifacts. There are suspicions that the statue was recovered illegally and eventually sold to the museum.

This statue is a modified version of the Apollo Sauroctonus hosted here at Scan the World. The tree trunk, left arm and the right forearm were removed. The figure was then tilted forward and to its left to match the lean of the Cleveland Apollo. A new plinth was created to more closely copy the bronze statue. 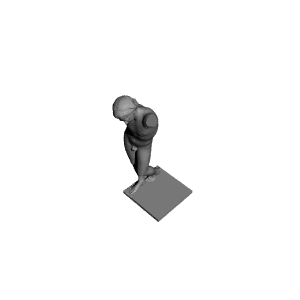 ×
3 collections where you can find Cleveland Apollo by jerry7171