3D
Scan The World
2,176 views 108 downloads
1 collection
Community Prints Add your picture
Be the first to share a picture of this printed object
0 comments

One of the most common questions we get around here is, "Hey! What's that big red building in the middle of the Chicago skyline?" Well, the answer is CNA Center. It's not a massive structure by Chicago standards -- just 44 stories. But its position on Wabash Avenue, set back just one block from Michigan Avenue and the vast greenspace of Grant Park, makes it stand out like a fire alarm in the skyline.  The people who run CNA Center apparently have a sense of humor about their building that is uncommon in Chicago. During a 2004 renovation of the lobby the entrances were hard to find for pedestrians. So the entrances were clearly marked with "Enter Here" while other portions of the black plywood wall were marked with a yellow dashed outline of a person and the legend "Don't enter here. You'll get splinters." In spite of the garish color, CNA Center isn't a building that attracts a lot of attention. Like a beauty queen it just stands there among the other contestants beaming and waving. But in 1999 the story was different. A shard of glass fell from a 29th floor window and killed a woman on the other side of Wabash Avenue. In the ensuing investigation it was revealed that the window had been cracked for months and that the building had a history of cracking windows for more than 20 years. The glass used in the building couldn't cope with the level of thermal expansion it experienced and at the time the victim was impaled by the glass, more than 40 windows were cracked. The building's owner paid a huge fine to the city, settled a wrongful death lawsuit filed by the family, and replaced all 3,000 windows in the building. As odd as the red color is, it's not the old colored skyscraper in Chicago. There is a bright blue skyscraper on LaSalle Street, but because it's hemmed in buy other buildings, most people don't notice it. 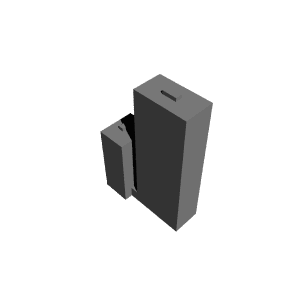 ×
1 collections where you can find CNA Center in Chicago, Illinois by jkurstin22