3D
Scan The World
6,743 views 473 downloads
3 collections
Community Prints Add your picture
Be the first to share a picture of this printed object
0 comments

King Amenhotep III (1390-1352 BC) commissioned a large number of statues of himself in Thebes, mostly for his mortuary temple on the west bank of the Nile. This colossal head was found in the Temple of Mut, the consort of the principal god Amun. The temple is just to the south-east of the Temple of Karnak.

Royal statues in Egypt were sometimes usurped (taken over) by later rulers. The normal procedure was simply to re-carve their name over the old one, but in some cases the physical features were also altered. Ramesses II (1279-1213 BC) seems to have altered a number of statues of Amenhotep III in this way, presumably because he wished to represent his ideal image in a certain form. In this statue, Ramesses seems to have concentrated on changing the characteristic thick lips of the older statuary to thinner ones. In other cases he took to reducing the plump stomach areas of Amenhotep's statues to make them closer to his ideal of the physical shape of the king.

The statue wears the double crown of Upper and Lower Egypt. 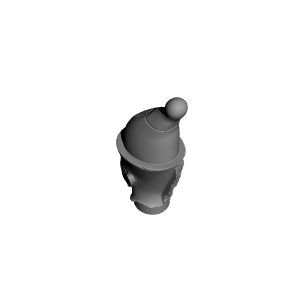 ×
3 collections where you can find Colossal Granite Head of Amenhotep III at The British Museum, London by Scan The World