3D
Scan The World
2,993 views 255 downloads
6 collections
Community Prints Add your picture
Be the first to share a picture of this printed object
0 comments

This head, unlike the other three found at La Venta, does not display parted lips. The individual depicted presents a harsh facial gesture, carved with a prominent frown and furrowed brow. He is wearing a helmet that displays the common Olmec "U" element directly above the forehead, from which three petal-shaped appendages emerge. This colossal head was discovered in 1925 by Frans Blom and Oliver La Farge, facing southward at the base of the large pyramid C-1 at La Venta. Behind the head were found several large stelae also facing southward— whose iconographic narratives are associated with the justification of power. These monuments, together with the colossal head, appear to bound and protect the sacred precinct of the political/religious center of the site. These sculptures leave no doubt that a primary mechanism for the legitimation of political power among the inhabitants of the site was through the representation of rulers in monumental stone sculptures.
This statue weight 24 tons. 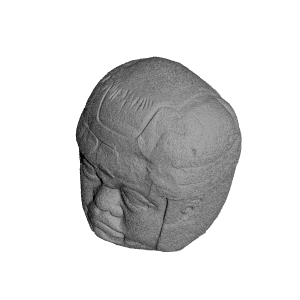