3D
Scan The World
4,196 views 187 downloads
1 collection
Community Prints Add your picture
Be the first to share a picture of this printed object
4 comments

This colossal right foot was once part of a statue of several times life-size, a scale that in antiquity was only used for images of gods and emperors. It wears a sandal of an elaborate Greek type first seen in the fourth century BC. It is therefore likely that the foot belonged to the statue of a senior Olympian god, probably represented seated as a standing figure would have been more than five metres tall.

Limbs of colossal statues, particularly feet, were acquired by eighteenth-century collectors as curiosities, and most Grand Tourists would have been familiar with the colossal head, right hand, and feet of a seated statue of the Emperor Constantine on display in the courtyard of the Palazzo dei Conservatori (Capitoline Museum) in Rome since the seventeenth century.

This foot was discovered near Naples and acquired by Sir William Hamilton (1730-1803), who presented it to the British Museum in 1784 together with a number of other antiquities and natural history specimens. A list of donations to the Museum dated 31 January 1784 refers to it as 'A Colossal Foot of an Apollo in Marble'. It is one of two antiquities of Hamilton's collection drawn for him by Francesco Progenie, a pupil of Pietro Fabris, who also contributed a number of drawings of Mount Vesuvius sent by Hamilton to the Royal Society in London. 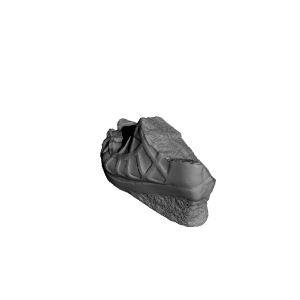 ×
1 collections where you can find Colossal Marble Foot at The British Museum, London by Scan The World