Colossal statue of a bird

3D
Scan The World
1,831 views 129 downloads
Community Prints Add your picture
Be the first to share a picture of this printed object
0 comments

Colossal statue of a bird

The colossal statue of a bird of prey, which originally had coloured stone inlays in the eye sockets, was excavated in the forecourt of the designated temple-palace at Tell Halaf. The whole area including its buildings should be considered as a sacred precinct used for worship and cultic offering. At the entrance to the temple-palace were three colossal statues of gods mounted upon their symbolic animals. The colossal bird statue mounted as part of a decorative column is set above a capital and structural in design. The bird may have a connection with the god-figures, but its significance remains undetermined. 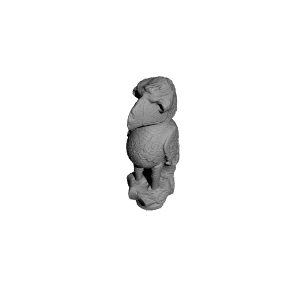