Colossal statue of a Sylvanus

3D
Scan The World
1,362 views 78 downloads
1 collection
Community Prints Add your picture
Be the first to share a picture of this printed object
0 comments

Colossal statue of a Sylvanus

A Sylvanus was a Roman tutelary deity of woods and fields. As protector of forests, he especially presided over plantations and delighted in trees growing wild. He is also described as a god watching over the fields and husbandmen, protecting in particular the boundaries of fields.

The statue was restored in two times. Fisrt with Paros marble and then with Carrare marble. The base and the calves are the oldest with better quality restorations. The head was restored as a Dionysos and not as a traditional Sylvanus. Small parts and right arm were made in Carrare marble.

This statue was part of the 2017 London Masterpiece Fair. 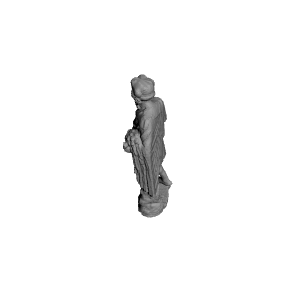