3D
Scan The World
4,242 views 498 downloads
2 collections
Community Prints Add your picture
Be the first to share a picture of this printed object
0 comments

This head is a fragment from a colossal seated statue of Constantine, about 30 feet high. The body was made of less valuable materials, while the exposed parts (head, hands, feet) were made of marble. Like the colossal statues of gods placed in Greek temples, this statue of the Emperor was originally placed in the west apse (apse of the short end) of the Basilica Nova of Maxentius and Constantine in the Roman Forum. Jas Elsner notes that this work broke with the earlier precedent of depicting the authoritarian figure with a beard. (See, for example, the group sculpture of the Tetrarchs where only the younger "caesars" are beardless. He adds that earlier portraits of Constantine did depict him with a cropped beard; here he is beardless, the "archetypal Roman general of the distant imperial past, a new Augustus, a new Trajan". Stylistically, this image still has some elements of individualistic portraiture (the hooked nose, for example); at the same time it illustrates the trends in late Roman works to focus on symbolic and abstracted elements: the "image" of authority or the "image" of spirituality, as indicated by the large otherworldly eyes. 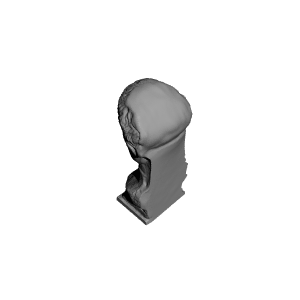 ×
2 collections where you can find Colossal statue of Constantine: head by Scan The World