3D
Scan The World
2,225 views 149 downloads
2 collections
Community Prints Add your picture
Be the first to share a picture of this printed object
0 comments

The figures depicted on this Roman column sarcophagus are Dionysus (in the middle) and his dancing and music-playing group - the maenads, a satyr and Pan. They are standing on plinths and framed by arcades resting on Corinthian pilasters. Similar sarcophagi were produced in Rome, inspired by examples form Asia Minor. 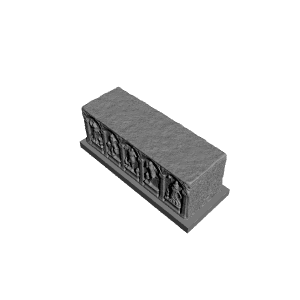