3D
360°
Scan The World
1,861 views 200 downloads
1 collection
Community Prints Add your picture
Be the first to share a picture of this printed object
0 comments

This is a fragment from a marble column, reworked in medieval times and showing four lions. It was found in the churchyard of Santa Maria di Peraga, in the province of Padua. The church was owned by the patriarch of Aquileia, so it is likely that it is of Aquileise origin. Aquileia was very prominent in Antiquity as one of the world's largest cities with a population of 100,000 in the 2nd century AD. 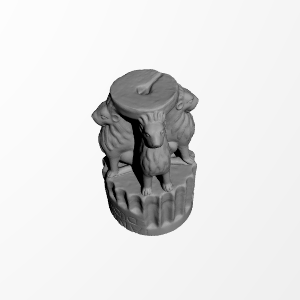