3D
Featured Scan The World
2,340 views 94 downloads
1 collection
Community Prints Add your picture
Be the first to share a picture of this printed object
0 comments

This monument commemorates the arrival to Mutal (Tikal) of Siyah K'ak, in 378 A.D., an important figure who held the title of Kaloomte, the highest rank of the Maya rulers: "Lord of Lords". With his arrival a new order in the Maya lowlands was established, with ties to the Mexican central highlands during the Early Classic, that evidenced by this and other monuments from Tikal, El Peru-Waka’, Uaxactun, The Sufricaya, Bejucal and Rio Azul. According to the inscriptions of "Marker" the event took place under the supervision of "Owl Spear thrower" (Jatz'om Kuh) ruler of a place called Ho Noh Witz, "Five Great Mountains", The final part of the text mentions another ruler named Mam Ch'amak, vassal of Siyah K'ak' who ordered to create this sculpture in 416 A.D.

Siyaj K'ak' (alternative spelling: Siyah K'ak' ), also known as Fire is Born (formerly nicknamed "Smoking Frog"), was a prominent political figure mentioned in the glyphs of Classic Period (250-800 C.E.) Maya civilization monuments, principally Tikal (which he conquered on January 16, 378[1]), as well as Uaxactun and the city of Copan. 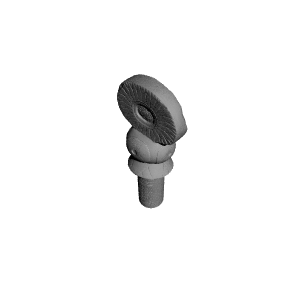