Console at The British Museum, London

3D
Scan The World
2,879 views 129 downloads
Community Prints Add your picture
Be the first to share a picture of this printed object
0 comments

Console at The British Museum, London

Console with double volute has a statuette of Victoria, which in ancient Roman religion, was the personified goddess of victory. She is the Roman equivalent of the Greek goddess Nike, and was associated with Bellona. She was adapted from the Sabine agricultural goddess Vacuna and had a temple on the Palatine Hill. The goddess Vica Pota was also sometimes identified with Victoria. Victoria is often described as a daughter of Pallas and Styx, and as a sister of Zelus, Kratos, and Bia. Unlike the Greek Nike, the goddess Victoria (Latin for "victory") was a major part of Roman society. Multiple temples were erected in her honor. When her statue was removed in 382 CE by Emperor Gratianus there was much anger in Rome. She was normally worshiped by triumphant generals returning from war. Victoria appears widely on Roman coins, jewelry, architecture, and other arts as a symbol of victory over death and determined who would be successful during war. 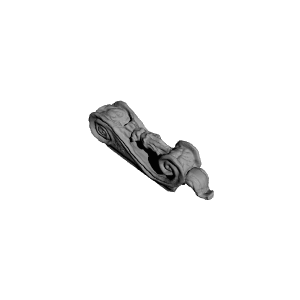 ×
0 collections where you can find Console at The British Museum, London by Scan The World