This object was made in Tinkercad. https://www.tinkercad.com/things/ljN7kNum9HK

Once upon a time there was a creature named Phil. Phil was different then all the other creatures that lived. The difference was, he was lonely. He didn’t have another creature like him, or so he thought. Phil tried being friends with the dinosaurs, the unicorns, fairies, trolls, goblins but none of these species had any interest in Phil. Phil decided that he had nothing better to do, so he should wander the earth in search for a friend. After wandering for a few years he comes to a place called, well, Place. There he finally found what he was looking for, a friend. This wasn’t just any friend it was a group of them. Phil was so happy that when he asked them what species they were they replied, “We are called the unifrogs”. Phil replied, “That’s what I am too!” Phil was finally happy after being lonely for so long. According to the flock of unifrogs, they live for hundreds of years.   The End 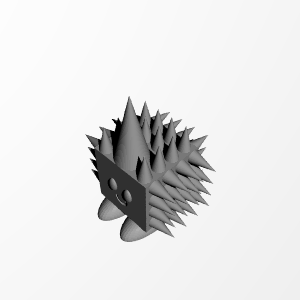 ×
0 collections where you can find Creature by Val1