3D
Scan The World
3,049 views 228 downloads
2 collections
Community Prints Add your picture
Be the first to share a picture of this printed object
0 comments

Caligula (AD 12-41) was Roman emperor from AD 37 to AD 41. He was aligula was born into the Julio-Claudian dynasty - the first ruling family of the Roman Empire. Despite being born Gaius Caesar, after Julius Caesar, he acquired the nickname "Caligula" (meaning "little soldier's boot") from his father's soldiers during their campaign in Germania. When his father Germanicus died, Caligula moved back to Rome with his mother and five siblings. After a conflict between his mother and the emperor at the time, the boy's adoptive granfather Tiberius, Caligula was the only surviving member of the family and took over the throne in AD 37.

There are not many sources describing his reign, but he is described as a noble and moderate emperor during the first six months of his rule. After this, he is believed to have become an insane tyrant - extravangant, perverse and cruel. While the reliability of these sources is questionable, it is known that during his brief reign, Caligula mainly paid attention to his luxurious dwellings and focused on increasing his power as an emperor.
He was assassinated as a result of a conspiracy from the empire's political figures in early AD 41.

In this bust, he is shown with a military chestplate (cuirass) and a crown of oak leaves tied in the back with a ribbon (fillet): the “corona civica". 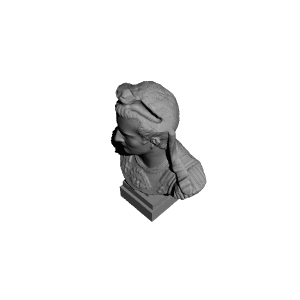