3D
Scan The World
2,552 views 62 downloads
3 collections
Community Prints Add your picture
Be the first to share a picture of this printed object
0 comments

This statue was found near the temple of Apollo.

Euphranor of Corinth was the only Greek artist who excelled both as a sculptor and as a painter. Pliny the Elder provides a list of his works including a cavalry battle, a Theseus, and the feigned madness of Odysseus among the paintings; and Paris, Leto with her children Apollo and Artemis, and Philip and Alexander in chariots among the statues.

No known existing statues have been identified as copies from works of Euphranor. His work appears to have resembled that of his contemporary Lysippus, notably in the attention he paid to symmetry, in his preference for bodily forms slighter than those usual in earlier art, and in his love of heroic subjects. He wrote a treatise on proportions. 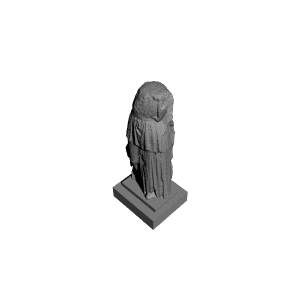