3D
Featured Scan The World
3,744 views 501 downloads
5 collections
Community Prints Add your picture
Be the first to share a picture of this printed object
0 comments

Cupid and Psyche (1840) is a work in marble by Irish sculptor Edward Ambrose (1814-1890). The sculpture was exhibited at the Royal Academy in 1852 and was subsequently purchased by Crawford Art Gallery through its Gibson Bequest Fund in 1920.

The story of Cupid and Psyche is take from the Latin novel Metamorphoses, written in the 2nd century AD by Apuleius. Psyche was a beautiful girl and Cupid, the son of Venus, fell hopelessly in love with her. When night came, Cupid visited Psyche, and he said that he would visit her every night but could not show his appearance to her. On this condition, she was allowed to live in a magnificent palace. Psyche’s sisters, jealous of her prosperity, talked Psyche into peeking at her lover, saying that he was a monster and that she should kill him. This scene represents the moment when Cupid’s real beauty is revealed to Psyche; taken by surprise, she dripped some hot wax onto his shoulder, waking him. He immediately disappeared. Psyche was desperate and set out in search of her lost love going through a lot of trials. Eventually they rejoined and got married. Psyche was made immortal and consecrated Goddess of Soul. 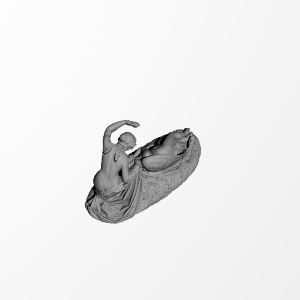 ×
5 collections where you can find Cupid and Psyche by CrawfordArtGallery