Cupid cutting his bow from the club of Hercules at the Louvre, Paris

3D
Scan The World
3,940 views 430 downloads
3 collections
Community Prints Add your picture
Be the first to share a picture of this printed object
0 comments

Cupid cutting his bow from the club of Hercules at the Louvre, Paris

Cupid, portrayed here as an adolescent, has stolen the weapons of Mars and the club of Hercules. Proud of having disarmed these two formidable deities, he laughs maliciously as he tests the spring of the bow he has carved out of the club. Bouchardon showed the terra-cotta model at the 1739 Salon; a marble was commissioned by Philibert Oudry, director of the King's Buildings, in 1740, but as Bouchardon was fully occupied by the Grenelle fountain, he did not begin work on it until 1745. The sculptor made several studies from life to give his figure a natural appearance and exhibited a plaster model at the 1746 Salon. He worked on the marble from July 1747 to May 1750, carrying out the sanding and polishing himself, tasks usually carried out by assistants. However, the astronomical fee - 21,000 livres - he received for the sculpture more than compensated for this. 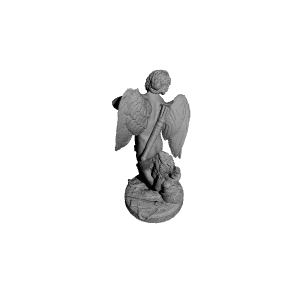 ×
3 collections where you can find Cupid cutting his bow from the club of Hercules at the Louvre, Paris by Scan The World