3D
Scan The World
7,250 views 311 downloads
2 collections
Community Prints Add your picture
Be the first to share a picture of this printed object
0 comments

John Gibson’s “Cupid Disguised as a Shepherd” serves as a good example of artistic reproduction within the sculptor’s studio. This work was his most popular subject, with at least nine versions commissioned in marble by patrons. Gibson first began working on the subject around 1830, and it was his belief that he had created a new interpretation of the god of love, although the figure was inspired by classical and Renaissance sources. The subject merges classicism with the contemporary taste for sentimentality, and also conveys a sense of theatricality as the god wears a costume to hide his identity. The statue was inspired by the pastoral comedy Aminta (1573) by the Italian poet Torquato Tasso. In this poem the god of love appears disguised as a shepherd so that he can use his arrows to play with the hearts of the nymph Silvia and the youth Aminta. In his memoirs, Gibson recorded in Italian the opening passage of the poem:

Who wou’d believe, that under an human Form, and under these pastoral Spoils, should be conceal’d a God? and that not one of the Sylvan Deities, or of the vulgar Ranks of Gods; but amongst the Superiour, and the Heavenly Ones the most Powerful: who often causes the bloody Sword to fall from the hand of Mars, and from Neptune, the Shaker of the Earth, the great Trident, and the eternal Thunders from Supreme Jove. In this Disguise, certainly, and in these Cloaths, Venus, my Mother, won’t so easily know me to be her son Cupid.27 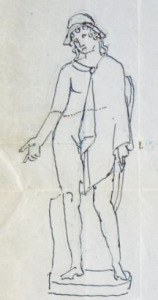 Dressed in a shepherd’s hat and cloak, the tips of his wings slightly visible below the mantle, Cupid wears a kind grin but it masks his precocious nature. A drawing (Fig. 3) suggests that early on Gibson wanted the figure to appear in motion, having shot an arrow and now rushing to hide his bow and quiver. By choosing instead to depict him upright and still, Gibson reverted to a study of idealized beauty. Each repetition measures approximately 51 inches, making the

god the height of an adolescent. He hides in his left hand behind him his ‘heart- piercing dart’ and his bow, the bottom portion of which rests against his calf.Four of the known repetitions of the statue show his right hand reaching outward, the fingers slightly curved as if to take someone’s hand, inspiring ‘confidence’ yet assuming ‘that air of modesty and timidity to conceal the more his cunning designs’, as Gibson described it. However, in the two earliest repetitions of the statue, he is shown holding a rose in his right hand, which may have been intended to enhance his flirtatious nature. No documentation has yet explained this change in the outstretched hand.

What follows is, for the first time, a published compendium of heretofore known information that documents the production and history of the nine known marble repetitions of this sculpture, as well as marble reductions and plaster variants.

In the early 1840s, a fifth version of the subject was commissioned by Richard Alison, a merchant from Woolton Hayes near Liverpool. This repetition is inscribed GIBSON FECIT ROMAE on the top of the tree stump. In 1873 Alison donated the statue to the Walker Art Gallery and it is now part of the collections of the National Museums Liverpool.

Nine repetitions and four reductions, all in marble, clearly demonstrate that Cupid Disguised as a Shepherd Boy was a popular work, and these versions do not include full-size plaster editions of the subject, at least one of which would have been in his studio, while another was exhibited in the Court of Modern Sculpture at the reconstituted Crystal Palace in Sydenham Park.

In no way did the reproduction and international marketing of this statue lessen its perceived quality, nor did its multiple forms create a sense that any of the later repetitions were less important than the first. This is because it was Gibson’s design, and not his specific handcrafting, that appealed to his patrons and enabled him to make numerous versions of a popular subject. 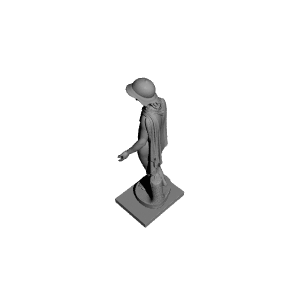 ×
2 collections where you can find Cupid Disguised as a Shepherd Boy at The Walker Art Gallery, United Kingdom by Threedscans