3D
360°
Featured Scan The World
5,171 views 872 downloads
8 collections
Community Prints Add your picture
Be the first to share a picture of this printed object
0 comments

The Dancing Faun is now precisely identified as a satyr, a roguish figure from ancient mythology and literature known for their love of wine, music and mischief. This satyr holds metal cymbala in his hands and wears a 'kroupezion' attached to his sandal, similar to modern day taps shoes. His faunlike features are visible in the tiny horns above his forehead, and the small goat's tail at his rear. His head is bent over, absorbed in the music, and every muscle of his athletic body, from his deltoid muscles, his abdomen, to his calves, appears tense as he plays.

This work is a Roman copy of a lost group dating from the 2nd Century BC, probably in bronze, known to us both from coins from the 2nd Century AD from Cyzicus and from many other copies (see bust Ma528 at The Louvre). The dancing sayr was apparently inviting a nymph seated opposite him to join him in dancing. The best preserved copies allow us to reconstruct the positions of the arms, which have been restored. 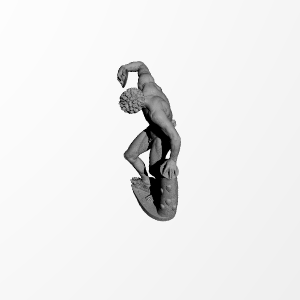