Durante degli Alighieri (c. 1265–1321), was a major Italian poet of the Middle Ages. His Divine Comedy, originally called Comedìa and later called Divina by Boccaccio, is widely considered the greatest literary work composed in the Italian language and a masterpiece of world literature.
In Italy he is called il Sommo Poeta ("the Supreme Poet") and il Poeta. He, Petrarch, and Boccaccio are also called "the three fountains" and "the three crowns". Dante is also called "the Father of the Italian language". This bust was made by an unknown sculpture but is of a lifesized scale, depicting the poet wearing a leafed crown which is iconic of his representations.
This object is part of "Scan The World". Scan the World is a non-profit initiative introduced by MyMiniFactory, through which we are creating a digital archive of fully 3D printable sculptures, artworks and landmarks from across the globe for the public to access for free. Scan the World is an open source, community effort, if you have interesting items around you and would like to contribute, email stw@myminifactory.com to find out how you can help.
Show more Show less
License
Printing Details 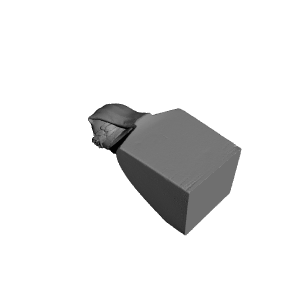 ×
6 collections where you can find Dante at the The Collection, Lincoln, UK by Threedscans
×
Tyler Public Library
@TylerPublicLibrary
2
Printed on: Other
Material: ABS
Posted at: 20th May 2022

We printed this on the Tyler Public Library's PolyPrinter 229.