3D
Scan The World
3,781 views 228 downloads
1 collection
Community Prints Add your picture
Be the first to share a picture of this printed object
0 comments

Commissioned by the Opera di Santa Maria del Fiore in 1408, this marble David represents Donatello's first work. It was probably never positioned on a counterfort of the tribune of the Duomo together with the Isaiah by Nanni di Banco as was originally intended. In 1416, it was purchased for Palazzo della Signoria, where it was exhibited in the Sala dell'Orologio as a civic symbol of Florentine freedom. In order to enhance the figure with the appearance of a victorious warrior, several changes were made to highlight the sling via which, as the Bible tells us, the young man defeated the giant Goliath.
The elegant drapery and the inclination of the bust are still typically Gothic, while the head of this biblical hero is reminiscent of ancient sculpture. 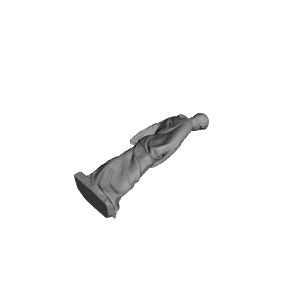 ×
1 collections where you can find David by Scan The World