3D
Scan The World
2,263 views 102 downloads
Community Prints Add your picture
Be the first to share a picture of this printed object
0 comments

This sculpture of the paitner and pioneer photographer D O Hill (1802-1870) is by his second wife, Amelia Robertson Paton. She has depicted in the form of a 'heroic' portrait bust, in which the sitter wears classical drapery rather than contemporary dress.

Amelia encouraged Hill to complete his most ambitious painting, The Signing of the Deed of Demission. This painting, which commemorated the establishment of the Free Church of Scotland, contained portraits of over 400 ministers. It was begun in 1843, and when it was finally exhibited in 1867, a reviewer wrote that Hill had completed his picture 'with a heroism unsurpassed in the history of art'. 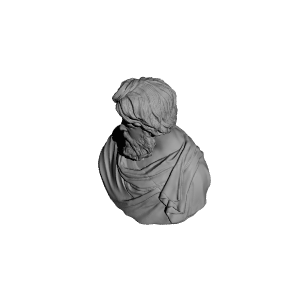