3D
360°
Scan The World
4,603 views 361 downloads
6 collections
Community Prints Add your picture
Be the first to share a picture of this printed object
0 comments

This is a statue of David triumphant over Goliath made by Giuseppe Maria Mazza.

Giuseppe Maria Mazza (1653 – 1741) was one of the leading sculptors of Bologna, Italy, in the late 17th and early 18th centuries. He was trained as a painter, but is best known for his fine sculptural work in terracotta and stucco.

The adolescent figure of David rises above the lifeless body of the defeated figure of Goliath, hoisting up the giant’s severed head in a display of improbable triumph. The ingenious composition, with the mass of drapery below, provides a support for David's confident posture and shows the dramatic contrast in scale between the figures, specifically the two heads. 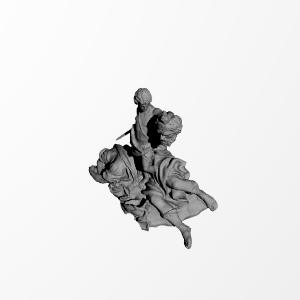