3D
Scan The World
3,537 views 345 downloads
6 collections
Community Prints Add your picture
Be the first to share a picture of this printed object
0 comments

This is a marble sculpture showing the nude goddess Diane in a confident, striding, pose during her haunting with a dog.

Paul-Jean-Baptiste Gasq had a keen interest in sculpting classical and allegorical subjects, but also created portraits in bust, medallion, bas-relief and statuette form for affluent French families. Gasq was the winner of the first Prix de Rome in 1890 and became a member of the Institute in 1935. 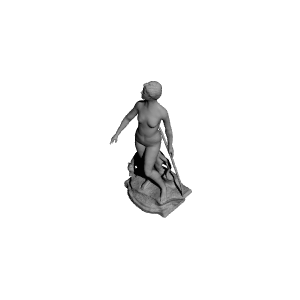