Diana with a deer

3D
Scan The World
2,270 views 103 downloads
1 collection
Community Prints Add your picture
Be the first to share a picture of this printed object
0 comments

Diana with a deer

This is a modern abstract sculpture depicting Diana, the goddess of the hunt in Roman mythology, mythologically similar to the Greek goddess Artemis. The daughter of Jupiter and Latona, Diana was born with her twin brother Apollo on the island of Delos.

A goddess of both chastity and fertility, and also of the moon, Diana's cult became popular throughout the ancient Roman empire, both among the nobility and the lower classes. She was the patron of slaves, who could find sanctuary in her temples, and of women seeking to conceive healthy children. Eternally young and beautiful, she was known to possess a quick temper and fiercely defended her virginity.

Often portrayed with bow and arrow and accompanied either by a deer or hounds, Diana was the goddess of both wild and domestic animals. Her temple in Ephesus was one of the wonders of the world.

In later centuries, Diana figured in European myths of the female Wild Hunt. During the Renaissance, she became a popular figure in art, poetry, and drama. More recently, her early role as a strong female deity has been examined in academic discussions of the history of religions, and she has inspired a branch of the neo-pagan religion. She is an archetype of the competent, free-spirited, independent female. 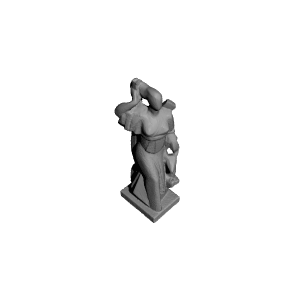