3D
Scan The World
2,799 views 222 downloads
3 collections
Community Prints Add your picture
Be the first to share a picture of this printed object
0 comments

This is an ancient marble sculpture depicting Greek gods Dionysus and Eros. Dionysus was the Olympian god of wine, vegetation, pleasure, festivity, madness and wild frenzy. He is depicted as a long-haired youth and his attributes include a drinking cup and a plant crown and fresh grapes.

Eros was a god of love. In the Theogony of Hesiod (fl. 700 BCE), Eros was a primeval god, son of Chaos, the original primeval emptiness of the universe, but later tradition made him the son of Aphrodite, goddess of sexual love and beauty, by either Zeus (the king of the gods), Ares (god of war and of battle), or Hermes (divine messenger of the gods). Eros was a god not simply of passion but also of fertility. 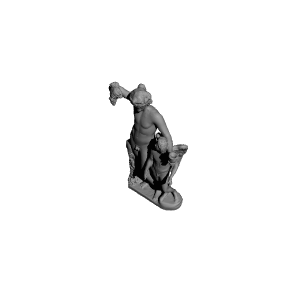