3D
Scan The World
1,552 views 103 downloads
Community Prints Add your picture
Be the first to share a picture of this printed object
0 comments

At the very beginning of the 20th century Rudolf Belling’s name was something like a battlecry. The composer of the "Dreiklang" evoked frequent and hefty discussions. He was the first, who took up again thoughts of the famous Italian sculptor Benvenuto Cellini (1500-1570), who, at his time, stated, that a sculpture should show several good views. These were the current assumptions at the turn of the century. However they foreshadow an indication of sculpture being three-dimensional.

For Rudolf Belling, a sculpture should show only good views. And so he became an opponent to one of the German head scientists of art in Berlin, Adolf von Hildebrandt, who, in his book, The problem of Form in Sculpture(1903) said: "Sculpture should be comprehensible – and should never force the observer to go round it". Rudolf Belling disproved the current theories with his works.

His theories of space and form convinced even critics like Carl Einstein and Paul Westheim, and influenced generations of sculptors after him. 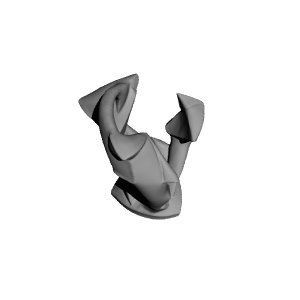