Discophore at the Louvre, Lens

Discophore at the Louvre, Lens

The Discophoros, also spelled Discophorus, (Greek - "Discus-Bearer") was a bronze sculpture by the classical Greek sculptor Polyclitus, creator of theDoryphoros and Diadumenos, and its many Roman marble copies. (It is not, however, to be confused with Discobolus of Myron, which shows a discus being thrown, not carried.)

Like the Doryphoros and Diadumenos, it was created as an example of Polyclitus's "canon" of the ideal human form in sculpture. It features a young, muscular, solidly-built athlete in a moment of thought before throwing a discus. Most marble copies feature the addition of a marble tree stump - marble is weaker but heavier than bronze- as the stump is needed for support. These copies are also often missing their arms, which are often restored. 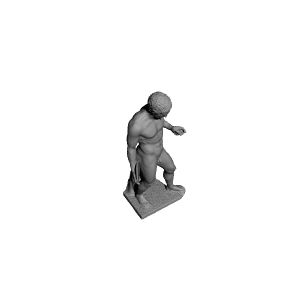 ×
1 collections where you can find Discophore at the Louvre, Lens by Scan The World
×
Myo-Gul BAE
@BMG
1
Posted at: 22nd June 2015
Loading comments...