3D
Scan The World
1,712 views 104 downloads
Community Prints Add your picture
Be the first to share a picture of this printed object
0 comments

Donald Dewar, 1937 - 2000. Secretary of State and First Minister for Scotland

Dubbed by the press 'father of the nation', Donald Dewar reinstated the Scottish Parliament. He became First Minister in May 1999 and presided over the official opening in July that year. A private man, he had told journalists that his perfect Christmas would be spent alone "with an oven-ready meal and a stack of books". As if commenting on this vision, the sculptor, Archibald Forrest, has balanced Dewar's head on a pile of books. Mostly by Ruskin, they also make reference to Dewar's interest in art. He was particularly fond of the work of the Scottish Colourists. 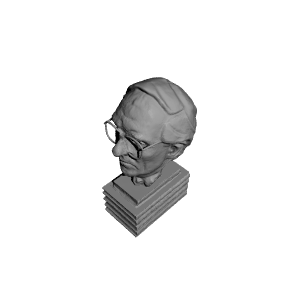