Double Herm of Aristophanes and Menander

3D
360°
Featured Scan The World
1,512 views 228 downloads
Community Prints Add your picture
Be the first to share a picture of this printed object
0 comments

Double Herm of Aristophanes and Menander

A herm is a (stone) rectangular-sectioned pillar topped with a head. Their origins were used as waymarkers for travellers and the topped portraits were reserved for depictions of gods; later on they were used as portrait busts, as found in this janiform example. Janiform busts borrow their name from Janus, the Roman god of doorways and transitions, who was often portrated with two heads.

Aristophanes (460 - 380 BC) was the most famous writer of Old Comedy plays in ancient Greece. Eleven of his forty plays survive virtually complete. Menanger was also a dramatist, and best-known representative of Athenian comedies.

(Scanned by Merete Sanderhoff of the Statens Museum for Kunst). 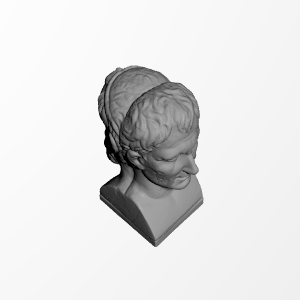