Charles Caldwell was a physician and professor of medicine at Transylvania University in Lexington, KY. He was one of the earliest adoptors of phrenology in America, giving his first series of lectures on the subject to medical students in 1821.

This bust details Caldwell's views on the study of how the shape of a human's skull was intrinsic to their behavior. It was made to accompany his written works 'Elements of Phrenology', 'The Phrenolohical Journal and Miscellany', the latter contained essays on the temperaments and mental derangement, penitentiary discipline and moral reform. 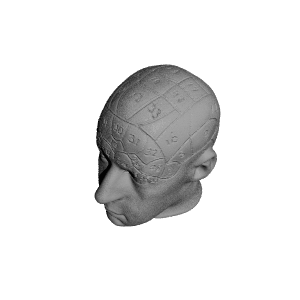