3D
Scan The World
3,294 views 279 downloads
1 collection
Community Prints Add your picture
Be the first to share a picture of this printed object
0 comments

This plaster bust of Dr John Rae depicts the explorer sporting a distinctive moustache and mutton chops. This is one of many plaster casts owned by the University of Edinburgh's art collection, seen across the university's buildings.

John Rae was a Scottish surgeon and explorer who travelled across northern Canada. He found the final portion of the Northwest Passage (Rae Strait, named after him) and reported the fate of Franklin's lost expedition. In 1846-47 he explored the Gulf of Boothia northwest of Hudson Bay. In 1848–51 he explored the Arctic coast near Victoria Island. In 1854 he went from Boothia to the Arctic coast and learned the fate of Franklin. He was noted for physical stamina, skill at hunting and boat handling, use of native methods and the ability to travel long distances with little equipment while living off the land. 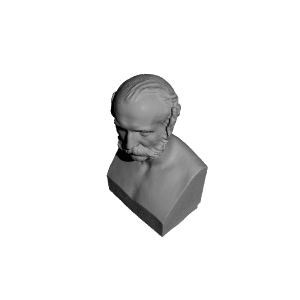 ×
1 collections where you can find Dr John Rae by AnatomicalMuseum