3D
Scan The World
1,769 views 90 downloads
Community Prints Add your picture
Be the first to share a picture of this printed object
0 comments

Eugène Dodeigne (1923–2015) was a French sculptor living and working at Bondues (Nord-Pas-de-Calais). Dodeigne was born in Rouvreux, near Liège. He learned his trade from his father, a stonecutter, who hired him to take courses in drawing and modeling at Tourcoing and Paris at the École nationale supérieure des Beaux-Arts, where he experienced a revelation in the studio of Marcel Gimond. It was under the influence of the abstract forms of Constantin Brâncuși. He then follows, in 1960, the path of chipped stone that leads to an abrupt figuration, highly expressive, continuing until his most recent sculptures. he also absorbs the counting of Giacometti and Germaine Richier. When asked to recall his early works and his influences, he remains elusive. 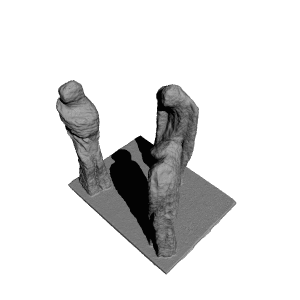