3D
Scan The World
2,236 views 177 downloads
1 collection
Community Prints Add your picture
Be the first to share a picture of this printed object
0 comments

acques Macdonald, Duc de Tarente (1765-1840) was a distinguished French general who served as marshal of the Empire under Napoleon. Having joined the French army in the 1780s, he was a colonel when the French Revolution erupted. After a brief campaign in Italy from 1798-9, he returned to France and supported Napoleon during the coup d’état of 18 Brumaire. He fell out of favour with Napoleon when he supported the anti-Bonapartist General Moreau in 1804, leading to his discharge. However, in 1809, Napoleon recalled him and eventually made him marshal of the empire and Duc de Tarente. Macdonald later served Louis XVIII, who selected him to head the defence of Paris against Napoleon in 1815. After the Second Restoration of the Bourbons, Macdonald was made Major General of the Royal Guard, and named to the Legion of Honour. 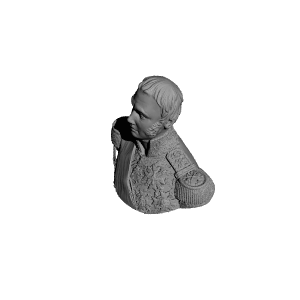