3D
Featured Scan The World
3,550 views 129 downloads
Community Prints Add your picture
Be the first to share a picture of this printed object
0 comments

The duck-shaped vessel is a unique container thatwas made since the Three Han States period. It shows people’s religious beliefs about birds. In particular, the duck was regarded as a sacred animal and the deliverer of spirits because it could swim across rivers and oceans and get to the other side of the world that was unreachable for humans. Normally, the duck-shaped pottery sits on top of a pedestal. It has a hole for filling liquid on the back of the duck, and another hole for pouring the liquid on the tail part of the duck. The body of the duck is empty.This duck-shaped pottery has an oval-shaped cylinder attached on the center of the body. There are signs of greenish yellow glaze, and parallel lines are drawn on the body. It has a wide beak. The trumpet-shaped pedestal has four rectangular cut-outs. You can seea linewhich shows that the body and the pedestal were attached together.It is made of clay mixed with fine sand, hasa grayish blue color, and was baked in even temperature.

The duck-shaped vessel is replicated and made into a container that can be used in the kitchen. The duck shape, pedestal, cut-outs are reproduced the same as the original. In the past, the duck-shaped vesselswere made for ceremonial purposes. The duck was regarded as a sacred animal and it symbolized the deliverer of spirits because it could go across different worlds by swimming over rivers and oceans that humans could not reach. 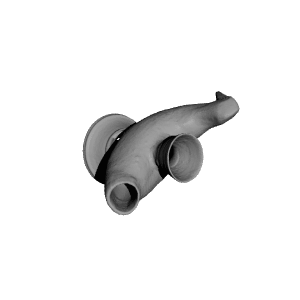 ×
0 collections where you can find Duck Shaped Vessel by 3dupndown