This plaster copy was bought in 1904, made from an antique Roman copy of a now lost Greek, Hellenistic statue from around 241-197 BC. The Greek original may have been placed at the Pergamon Altar. The right arm was restored by the Renaissance artist Michelangelo Buonarotti.

The work was most likely commissioned by Attalus I of Pergamon to celebrate his victory over the Galatians, the Celtic or Gaulish people of parts of Anatolia (now Turkey). The identity of the sculptor of the original is unknown, but it has been suggested that Epigonus, a court sculptor of the Attalid dynasty of Pergamon, may have been the creator.

The copy was most commonly known as The Dying Gladiator until the 20th century on the assumption that it depicted a wounded gladiator in a Roman amphitheatre. Scholars had identified it as a Gaul or Galatian by the mid-19th century, but it took many decades for the new title to achieve popular acceptance.

The statue serves both as a reminder of the Celts' defeat, thus demonstrating the might of the people who defeated them, and a memorial to their bravery as worthy adversaries. The statue may also provide evidence to corroborate ancient accounts of the fighting style—Diodorus Siculus reported that "Some of them have iron breastplates or chainmail while others fight naked". Polybius wrote an evocative account of Galatian tactics against a Roman army at the Battle of Telamon of 225 BC:

The Insubres and the Boii wore trousers and light cloaks, but the Gaesatae, in their love of glory and defiant spirit, had thrown off their garments and taken up their position in front of the whole army naked and wearing nothing but their arms... The appearance of these naked warriors was a terrifying spectacle, for they were all men of splendid physique and in the prime of life. 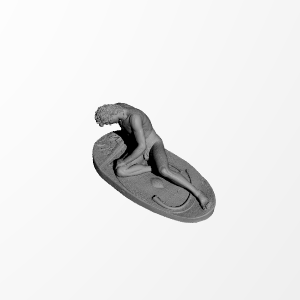 Printed on the Craftbot 3, sliced with Simplify 3D. Finished in Copper with a Verdigris.