3D
2,804 views 458 downloads
3 collections
Community Prints Add your picture
Be the first to share a picture of this printed object
0 comments

A 3D Sculpted Eagle head for use in traditional gaming.

*The Marker of Talon Company: Vanguard of The Golden Griffins of Velandria. It became tradition in the company to carve out one's own marker on initiation, and this is just one of many unique eagles that one would be found amongst those soldiers. The eagles would bear the name of their holder, inscribed on the base of each marker. When a soldier was killed in action, his comrades would collect his marker. It would return to their homeland, where each eagle would pass to the family of the deceased. Those that had no family to pass to would have their markers held on display in The Halls Of The Unforgotten: a memorial to all who perished fighting for the Golden Griffins, yet had none but their comrades to carry on their memory.*

Use it as a party marker on your campaign map, for keeping track of your progress through the world. Use it in campaign battle planning sessions for wargames or RPGs alike. Or maybe you just really like eagles and want a cool bust to print and paint. Whatever you want it's yours! No cost. Really, it's free.

Sculpted in Blender and easy for printing! Supports are still required but not much is needed for a good quality print. 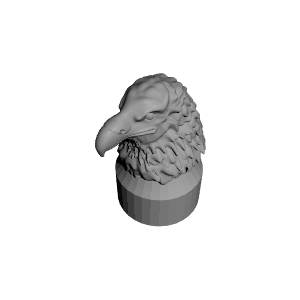