3D
360°
Featured Scan The World
4,351 views 493 downloads
9 collections
Community Prints Add your picture
Be the first to share a picture of this printed object
0 comments

This plaster copy is a direct cast of the marble statue from the East pediment of the Parthenon (East pediment G), now housed at The British Museum known coloquially as The Elgin Marbles. The East pediment showed the miraculous birth of the goddess Athena from the head of her father Zeus. Many of the figures of this central scene are now fragmentary or entirely lost.

Her right knee is bent, the figure is clad in a chiton with a girdle and a diploidion with the drapery bellowing out behind. The head, right forearm and hand, entire left arm and both feet are missing, which adds to the sculpture's mystique. This figure is considered exceptional in the fact that her plinth was sunk into the pediment floor.

With all this said, the identification for this statue is complex and many studies have been made to find who it depicts. Perhaps it represents Hebe, but Hekate, Artemis and Iris have also been suggested. 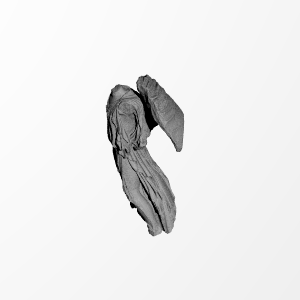 ×
9 collections where you can find East Pediment G Statue, Artemis (?) by SMK - Statens Museum for Kunst