This is a Tinkercad Competition entry.

Easy Edges is the name given to a series of furniture designs by Frank Gehry from 1969 to 1973. These early designs were partially responsible for Gehry's rise to public recognition in the early 1970s. After discovering that corrugated cardboard layered enough times in alternate directions builds strength into the piece and make it suitable for the everyday use, Gehry created a series of pieces of furniture such as the "Easy Edges Wiggle Side Chair" that take advantage of the versatility of cardboard as a medium. Hardboard facing is applied to the furniture's flat surfaces to add to the durability of the designs. Gehry's use of cardboard as a medium demonstrates his "fundamental concern with manipulating basic materials in unconventional ways to produce objects that are functional yet also visually striking".

However, the Easy Edges series never reached high production volumes due to sales prices exceeding rates Gehry had expected. That, in addition to Gehry's aversion to the role of a furniture designer rather than that of an architect resulted in a cessation of production until in 1986 Vitra AG relaunched four models from the Easy Edges series into production (source: publication "Dimensions of Design" by Vitra Design Museum, 1997), including the "Wiggle" chair. 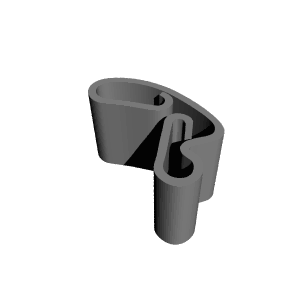