3D
Scan The World
2,766 views 120 downloads
Community Prints Add your picture
Be the first to share a picture of this printed object
0 comments

The Efebo of Subiaco (or the Youth of Subiaco, Italian 'Efebo Subliacense) is a marble sculpture of a young teenage male found in the Villa Sublaquensis of Nero in Subiaco.

The headless marble is a copy of a lost Greek bronze, as demonstrated by a strange support in the form of a tree trunk and " the failure of the silhouette set, deformed to keep it within the limits of a single block of stone ," As Rhys Carpenter notes  ; Is unlikely to be subsequent to Neron , due to the location where it was found.  The date of the original in Bronze copying is refuted. At the time of his discovery August Kalkmann gave an approximate date of beginning of the 5th century BC. C.  but before the World War II , general opinion placed it at the end of the 4th century a. C. in the turn towards the Hellenistic style, to which Rhys Carpenter opposed, suggesting instead the years 60 or 70 of the fifth century.  Brunilde Sismondo Ridgway , in a new radical dating of the history of Greek sculpture, has placed it among the classicist works of the 1st century BC. C.

The athlete is shown in the middle of a pass, in an archaic convention of the race.  His left arm, now gone, once brushed his right knee. His right arm extends up and forward. His right leg advances with one knee bent. His left knee does not touch the ground, nor does he support the weight of his violently twisted torso: Carpenter compared him to the lower half of Niobides stumbling.

Text from the museum:

This youthful male figure is portrayed off balance, about to fall to the left, perhaps due to a wound received during an attempt to flee. The sculpture must have been completed with head raised, right up stretched forward and left arm behind the body. The subject may be a Niobid, one of the fourteen children of Niobe whom Leto had Artemis and Apollo shoot dead with arrows. The sculpture is a copy of a Greek bronze original of the late Hellenistic period. Imperial period. 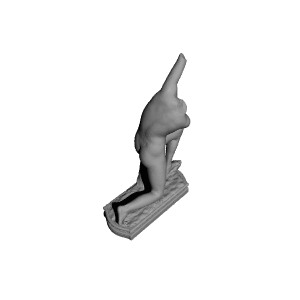