3D
Scan The World
3,849 views 260 downloads
2 collections
Community Prints Add your picture
Be the first to share a picture of this printed object
0 comments

The Bussa Emancipation Statue is the work of Barbados' best known sculptor Karl Broodhagen and symbolises the breaking of the chains of slavery at Emancipation.

Slavery, abolished in 1834, was followed by a four-year apprenticeship period where free men continued to work a 45-hour week without pay in exchange for living in the tiny huts provided by the plantation owners.

Freedom from slavery was celebrated in 1838 at the end of the apprentice period with over 70,000 Barbadians of African descent taking to the streets with the Barbados folk song:

Many Barbadians refer to the statue as Bussa, the name of a slave who helped inspire a revolt against slavery in Barbados in 1816. 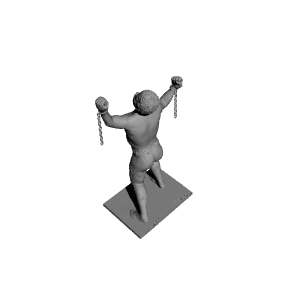