3D
Scan The World
3,557 views 159 downloads
1 collection
Community Prints Add your picture
Be the first to share a picture of this printed object
0 comments

This sculpture has an interesting base after being found in the River Thames at London Bridge in 1834.

The bronze head comes from a larger than life-size statue. The statue probably stood in a public space in Roman London, perhaps in the forum. It may have been put up to commemorate Hadrian's visit to Britain in AD 122, during which he ordered the construction of a wall to defend the north of the province. Hadrian travelled widely in the Empire, and there are many marble statues of him, but this bronze is a rare survival. 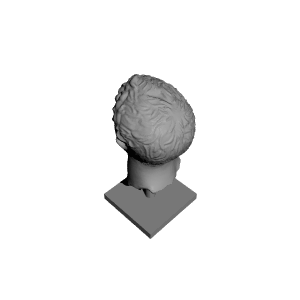 ×
1 collections where you can find Emperor Hadrian at The British Museum, London by Scan The World