3D
Scan The World
3,502 views 124 downloads
1 collection
Community Prints Add your picture
Be the first to share a picture of this printed object
0 comments

Swiss artist Max Bill (1908-1994) was a pioneer in sculpting Möbius strips. Starting in the 1930s, he created a variety of "endless ribbons" out of paper, metal, granite, and other materials.
When Bill first made a Möbius strip, in 1935 in Zurich, he thought he had invented a completely new shape.
The artist had been invited to craft a piece of sculpture to hang above a fireplace in an avant-garde house in which everything was to be electric. The idea was to add some sort of dynamic element to increase the attractiveness of an electric fireplace that would need to glow without a mesmerizing dance of flames.
One possibility was a sculpture that would rotate from the upward flow of hot air. Bill's design experiments included twisting paper strips into different configurations.
"After many experiments, I came up with a solution that seemed reasonable," he wrote in a 1972 essay.
"Not long afterwards, people began to congratulate me on my fresh and original interpretation of the Egyptian symbol for infinity and the Möbius ribbon," Bill recalled. "I had never heard of either of them. My mathematical knowledge had never gone beyond architectural calculations, and I had no great interest in mathematics."

Over the years, Bill nonetheless became a strong advocate of using mathematics as a framework for art.
"I am convinced it is possible to evolve a new form of art in which the artist's work could be founded to quite a substantial degree on a mathematical line of approach to its content," Bill argued in a 1949 essay.
As a sculptor, Bill firmly believed that geometry is the principal mechanism by which we try to understand our physical surroundings and learn to appraise relations and interactions between objects in space.
Mathematical art is best defined as "the building up of significant patterns from ever-changing relations, rhythms, and proportions of abstract forms, each one of which, having its own causality, is tantamount to a law unto itself," he insisted.
Bill went on to enumerate some of the perplexities that arise in mathematics and their implications for the artist. One such mathematical conundrum was what he described as the "inexplicability of space."
As an example, he cited the Möbius surface as one "that can stagger us by beginning on one side and ending in a completely changed aspect on the other, and somehow manages to remain that self-same side."

Max Bill was a hugely influential founder of the Concrete Art movement, not only through his variegated career as a sculptor, painter, and industrial and graphic designer, but also as a prolific writer, scholar, and teacher. Bill had early ambitions to be a silversmith, but quickly changed his focus to architecture after seeing the work of Le Corbusier. Bill enrolled in the Bauhaus Dessau, where he studied under Josef Albers, Wassily Kandinsky, and Paul Klee. During this time, he began to formulate the principles of Concrete Art by expanding the theories of Theo van Doesburg, guided strongly by his training. Bill would also become an influential figure in furthering traditions of the Bauhaus, as well as in environmental art. 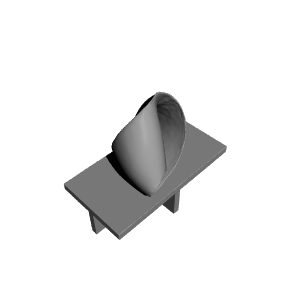 ×
1 collections where you can find Endless Ribbon at The Middelheim Museum, Antwerp by Scan The World